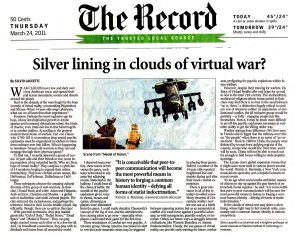 A scoop is the first acquisition of an exclusive news story. This is the story of a local paper’s scoop on the Christie Scandal and how it generated increased popularity and revenue. This could happen to your blog or website too—by issuing a scoop

‘Search traffic is important, to put it mildly.

‘Scoops in modern media were once the hallmark of great journalism and generated increased revenue. Now, scoops can be followed in hours or minutes instead of days, limiting their impact on a media outlet’s income. As The Washington Post’s Erik Wemple wrote earlier today, both the New York Times and The Washington Post chased the story quickly.

‘Oates attributed the staying power of the paper’s traffic to two important elements: links from other sites that credited The Record, and the impact of those links on the paper’s appearance in search engines.

“‘We’re pretty happy with the [search] position we’ve maintained with this particular story and series of stories even though the competition is basically nationwide,” Oates said.

“‘Scooping a story can obviously generate a lot of social media buzz, as well. Search engines are already integrating social signals into their algorithms, and this is only going to intensify moving forward,” wrote David Reich, co-founder and CEO of SixEstate, an SEO firm that concentrates on journalism…’
more

When Corporations Want Profits, They Don’t Ask for Permission
‘”Large retail companies are stealing the work of independent artists – and forcing them to remain silent about it.”

The WikiLeaks Mole that Betrayed Assange
The first FBI informant inside the group
‘On a recent frigid night near Reykjavik, Iceland, Sigurdur “Siggi” Thordarson slips into a bubbling geothermal pool at a suburban swim club. The cherubic, blond 21-year-old, who has been called everything in the press from “attention seeker” to “traitor” to “psychopath,” ends many of his days here, where, like most places around the city, he’s notorious. But even at a spa, he can find only the briefest moment of relaxation. Soon, the local prosecutor who is trying him for leaking financial records joins him in the tub, and Siggi quickly has to flee to another pool. “How does it feel to be the most dangerous man in Iceland?” a bather shouts across the steam.

‘In person, Siggi’s doughy shape and boyish smile make him seem less than menacing – unless you’re another one of the world’s most dangerous men, Julian Assange. Four years ago, just as WikiLeaks was winning international notoriety, the then-17-year-old hacking prodigy became Assange’s youngest and most trusted sidekick…’
Read more

Filipino environmentalist makes it to TED Fellows
Let’s talk about poo: Fellows Friday with Francis de los Reyes III
‘Environmental engineer Francis de los Reyes works with cutting-edge microbiological techniques to create solutions in the fields of environmental biotechnology and engineering. But his big passion, both professionally and personally, is finding ways to improve the plight of the world’s 2.5 billion people living without adequate sanitation. In this conversation, he tells the TED Blog about his research, his on-the-ground work to improve living conditions in his native Philippines and beyond — and his ongoing fascination with toilets.

‘You gave a talk at the TED Fellows Retreat on sanitation. What sparked your interest in that?…’

Poch is a Bookrix author and a freelance writer. He is a frequent contributor to TED Conversations.
View all posts by DigitalPlato →
This entry was posted in business and commerce, copyright, environment, espionage, publishing and tagged Arthur Conan Doyle, Julian Assange, search engines, Sherlock Holmes, wikileaks. Bookmark the permalink.