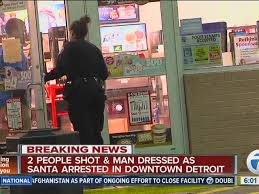 ‘A 26-year-old man dressed in a Santa suit was arrested early Sunday and faces charges after he allegedly shot two men outside a downtown Detroit gas station.

‘”Apparently, there was an argument over Santa’s girlfriend — Mrs. Claus,” Detroit Police Officer Adam Madera said of the 2 a.m. incident that started in the Speedway gas station at Jefferson and I-375.

‘”One of the victims ran back to his car, and the guy dressed as Santa Claus must’ve thought he was going to get a gun because he started shooting.”

‘One victim was shot in the chest; the other in the hand. Both victims, 29, are expected to recover from their injuries, Madera said…’
more

Lost family survived 11 days in outback by collecting rain water
Steven Van Lonkhuyzen and his 2 boys lived on rainwater, 4 days’ worth of food
‘Heavy rain helped a father and his two young sons survive 11 days lost in a national park in outback Queensland.

‘The ordeal of Steven Van Lonkhuyzen, 37, and his sons Ethan, seven, and Timothy, five, began when they took a wrong turn and got bogged in the Expedition National Park in the state’s southwest.

‘Stranded without any mobile reception, Lonkhuyzen rationed food he had packed for a four-day camping trip and put plastic containers out to capture rain.

‘By the time they heard the welcoming sound of a motorbike on Sunday afternoon, the trio were down to their last slices of bread…’
more

One Of The Biggest Lies Ever Told
‘The NY Fed shipped approximately $40 billion in cash between 2003 and 2008. In just the first two years, the shipments included more than 300 million individual bills weighing a total of 363 tons.

‘The end of this story is where Halliburton and its subsidiaries were paid the lion’s share of the almost $400 billion dollars that has been spent in Iraq. And what do we have to show for it? A fractured state that is rapidly regressing back to its bloody tribal history and another fertile breeding ground for the next generation of manufactured Jihadis. A flawless victory by Cheney and his compatriots. We can only hope that the American people awake from their slumber and become enraged by the lies and rampant graft that is inherent in the current system. We should remember these incidents as we go forward as a nation and do our best to vilify and prosecute those who would be so brazen as to take our lives and treasure in their own pursuit of wealth…’
more

‘Excise tax revenues collected by the BIR from tobacco and liquor products reached P91.64 billion from January to September, 42 percent more than the P64.54 billion nine-month target set by government.

Poch is a Bookrix author and a freelance writer. He is a frequent contributor to TED Conversations.
View all posts by DigitalPlato →
This entry was posted in conspiracies, CRIME, government, news, Society and tagged Santa Claus, Steven Van Lonkhuyzen. Bookmark the permalink.