What to Tell Kids about Santa Claus 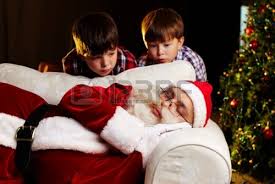 Margaret Mead on Myth vs. Deception

“Belief in Santa Claus becomes a problem mainly when parents simultaneously feel they are telling their children a lie and insist on the literal belief in a jolly little man in a red suit who keeps tabs on them all year, reads their letters and comes down the chimney after landing his sleigh on the roof. Parents who enjoy Santa Claus — who feel that it is more fun talk about what Santa Claus will bring than what Daddy will buy you for Christmas and who speak of Santa Claus in a voice that tells no lie but instead conveys to children something about Christmas itself — can give children a sense of continuity as they discover the sense in which Santa is and is not “real.”

“One thing my parents did — and I did for my own child — was to tell stories about the different kinds of Santa Claus figures known in different countries. The story I especially loved was the Russian legend of the little grandmother, the babushka, at whose home the Wise Men stopped on their journey. They invited her to come with them, but she had no gift fit for the Christ child and she stayed behind to prepare it. Later she set out after the Wise Men but she never caught up with them, and so even today she wanders around the world, and each Christmas she stops to leave gifts for sleeping children.” -Mead
more

Everything you didn’t know about Christmas [Video]
‘Did you know that the quaint custom of Christmas caroling actually began with drunk and rowdy revelers threatening people door to door looking for food and liquor?

‘Early versions of the heartwarming legend of Santa Claus described him as a horrible devil named Krampus who beat and kidnapped naughty children.

‘In America during the 17th and 18th Centuries, celebrating Christmas was against the law!

‘There’s a lot to tell about the history of Christmas, and a lot you may not know.
– See more

The Red Christmas
‘A bloody battle between Spaniards and Chinese rebels in the Philippines is now known as the “Red Christmas”.

‘Due to injustices suffered at the hands of the Spaniards – like double taxation and being relegated to a separate quarter called “Parian” – the Chinese collaborated with the British to massacre the Spaniards on the Christmas Eve of 1762. Unfortunately, one of the plotters revealed the plan to a Filipina who then relayed the secret to a Spanish priest from Mexico, Pampanga.

‘After receiving the news, then Governor General Simon de Anda led the Spanish forces to Guagua, Pampanga where they secretly attacked the Chinese rebels. The event, which occurred on Christmas day, was later known in Philippine history as the “Red Christmas”…’
Filipiknow.net

Poch is a Bookrix author and a freelance writer. He is a frequent contributor to TED Conversations.
View all posts by DigitalPlato →
This entry was posted in history, human interest, news, Society and tagged christmas, Christmas caroling, manila, philippines, Santa Claus. Bookmark the permalink.

1 Response to What to Tell Kids about Santa Claus